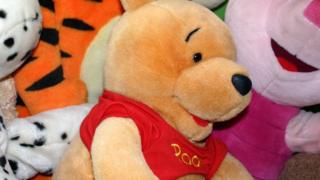 Winnie the Pooh has been named as the favourite children's book of the past 150 years, in a poll of more than 2,000 adults.

It beat Alice's Adventures in Wonderland, which came second, and The Very Hungry Caterpillar, which came third.

The Gruffalo, by Julia Donaldson, was the most recently written book making the top ten, coming in fifth place.

We asked you what your favourite books are and why...

Top 10 favourite children's books according to the poll:

I love most books because they just take you to another world, with wizards, vampires and demons.

I would have to pick The magic finger by Roald Dahl, it's not the most famous of his books but it is one of my favourites.

My favourite book is the Fault In Our Stars, its amazing!

I absolutely love the Wind In The Willows, I like the Famous Five, Michael Palin books and horrible histories are great as well.

My favourite book has to be Demon Dentist by David Walliams, but I like the series of unfortunate events as well.

I like Dead Man's Cove by Lauren St. John!

Joke books I love so much especially Harry Hill but Harry Potter by JK Rowling has to be my favourite!

Percy Jackson series, they are fascinating.

You simply can't beat Enid Blyton's Famous Five and the Secret Seven is great as well!

I think Gangsta Granny is the best book ever!

All the Harry Potter books are the best.

I love Matilda by Roald Dahl. I love it that much I am reading it again.

My favourite book series is the Famous Five because it's full of adventure, thrill and horror.

I love Pride and Prejudice alongside any Agatha Christie Book!

My favourite book is called We're Going on a Bear Hunt.

We are enjoying Michael Morpurgo books at the moment. We just read This Morning I Met a Whale and we loved it even though it was quite sad.

Roald Dahl is still our favourite author though!

The Very Hungry Caterpillar is the best!

I really like The Boy in the Striped Pyjamas.

Can't You Sleep Little Bear by Martin Waddell, is my all-time favourite book.

Horrid Henry is our class's favourite book. Our favourite Horrid Henry story is Mummy's Curse. We like it because it's exciting and funny. We also like mummies.

I would have to choose Pippi Longstocking because she is such an original, hilarious character!

The Hunger Games trilogy - if you haven't read them then do, it's worth it!

Diary of a Wimpy Kid is brilliant and it has a movie to go with it!

My favourite children's book is Charlie and the Chocolate Factory by Roald Dahl because it's about CHOCOLATE!

I love Harry Potter, best book EVER! But the Series of Unfortunate Events are good too!

The Three Little Pigs are the best!