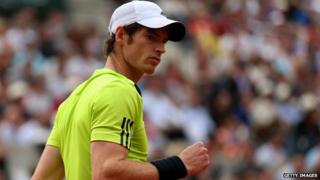 British tennis star Andy Murray has won in straight sets against Fernando Verdasco to reach the quarter-finals in the French Open tournament.

It was a tough start for Murray against the Spaniard, making a lot of unforced errors early on, but he powered through the first two sets 6-4, 7-5.

But the third set was even tougher and went to a tie-break.

Andy will now face Gael Monfils of France in the quarter-finals on Wednesday.