Who should be the fourth X Factor judge? 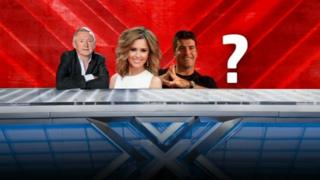 Louis Walsh says he's finally signed his contract for the new series of The X Factor.

He'll join Simon Cowell and Cheryl Cole on the judging panel for the next series.

But the fourth judge is still to be announced. So who could it be?

Louis said: "It has to be someone I like. I'd love it to be Sharon Osbourne but I don't think it's going to be her... I think it could be Mel B from the Spice Girls."

In his interview with Irish radio station 2FM, Louis also said that "people are also mentioning Alesha [Dixon] and Rita Ora as well."

And speaking this morning to BBC Radio 1, Cheryl Cole said she thought it would be likely to be another woman.

We asked you who you think it should be - and why...

This chat page has now closed but you can see a selection of your comments below.

I've heard rumours of Mel B and I think she'd be good as she is quite an honest person like Simon but she would get along with Cheryl as well!

Priyanka Chopra. It's about time we get global talent on a judging panel and that way people can learn about different cultures.

I think Will.i.am should be the new X factor judge as he is a really good mentor and his team won this year for The Voice.

We think Alicia Keys would be a good judge because she is an amazing singer and songwriter and is also a positive role model for young people.

I think someone like Mel B or Demi Lovato would spice up the panel because they're feisty and not afraid to say what they think.

I think Katy Perry should be an X factor judge because she is a great singer and will have good tips and experience for singers in the competition.

I think it should be Harry Styles, or one of the other 1D members; they were X Factor contestants and have done really well.

I think Kelly Rowland should be the fourth judge because she has experience of being on the show and Cheryl wants another girl on the judging panel.

I think that Rita Ora or Amelia Lily should be the fourth judge on the X Factor.

I think Peter Kay should be a judge for the funny sides of the acts!

I think it should be Ricky Wilson from The Voice because all the judges recommend pop but if Ricky was there more rock could get through.

I think that anyone with a strong spirit and great experience should be the fourth judge, for example Katy Perry.

I think Beyonce should be the new judge because she is a really good pop star and is very famous.

I think it should be Eminem because he hasn't really been on a talent show and I would really like to see him.

I think Liam Payne from One Direction should be the new judge on The X Factor.

I think it should be Adele: she is a good singer and people would enjoy to hear what she has to say.

I think the new judge should be a member of One Direction because they have experienced being a pop star and could give some good tips.

I want it to be Justin Bieber because he has talent.

X Factor quiz - how well do you know the show?