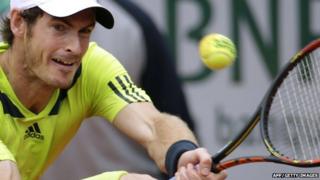 The match against Germany's Philipp Kohlschreiber was stopped 7-7 in the deciding set on Saturday night because of bad light.

Play kicked off again on Sunday, with the set finishing 12-10 to Murray after 40 minutes.

Murray now meets Fernando Verdasco from Spain for a place in the quarter-finals.