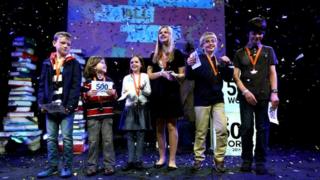 Six children have been announced the winners of BBC Radio 2's 500 Words competition 2014.

The challenge is for kids to write a whole story in just 500 words.

The judges, including Horrid Henry author Francesca Simon and Children's Laureate Malorie Blackman, chose the top three stories in two age groups: nine and under, and 10-13.

The stories from the six winners covered lots of different subjects, from minotaurs to World War One.

This year, there were a record 118,632 entries, and the top 50 kids were invited to the announcement of the winners, at the famous Hay Festival of arts and writing.

The two gold award winners receive a stack of books the same height as DJ Chris Evans - 6ft 2ins (1.88m) - who came up with the competition. 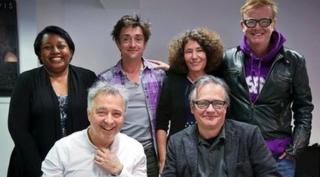 Chris said that this year, one of the problems the judges had to deal with was whether stories were original - and he says that the nine and under category had more inventive stories.

"The nines and under are always more original than the 10s and over," he said.

Now in its fourth year, the competition is designed to get children inspired by reading - and excited about writing too.