Fossilised crocodile tooth 'largest of its kind in UK' 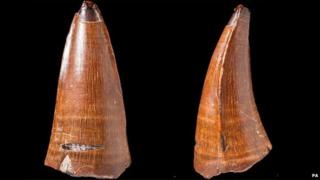 This fossilised tooth of a prehistoric crocodile is the largest ever recorded of its kind in the UK.

The tooth, which is 5.5cm long, was dug up from the sea bed near Chesil Beach in Dorset.

It belonged to an ancient relative of modern crocodiles, known as Dakosaurus maximus.

The tooth, which has a broken tip, is now in the fossil collection at the Natural History Museum in London. 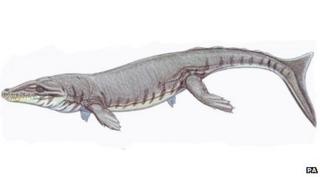 Scientists from the University of Edinburgh think the Dakosaurus maximus grew to about 4.5m in length and swam in the shallow seas of Europe 152 million years ago.

The shape of its skull and teeth suggest it ate similar food to killer whales, using its broad, short jaws to swallow fish whole and to bite chunks from larger prey.