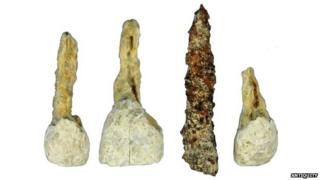 Archaeologists have found what could be remains of the earliest false tooth found in Western Europe.

The dental implant comes from the burial chamber of an Iron Age woman that was excavated in Le Chene, France.

The woman, who was between 20 and 30 years old when she died, had an iron pin in place of one of her teeth.

It is possible the pin once held a false tooth made from either wood or bone, which could have rotted away. 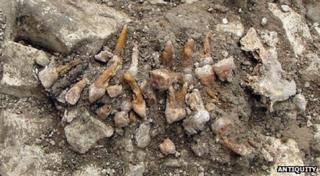 Antiquity
This photo shows the teeth in position during excavation. The iron pin is visible on the left

The dental implants are believed to be 2,800 years old and the findings have been published in the scholarly journal Antiquity.

"But the teeth were in an anatomical position, with the molars, pre-molars, canines and incisors. Then there was this piece of metal. My first reaction was: what is this?"

The teeth were bagged and taken away for a closer look.

Mr Seguin later realised that the woman had 31 rather than 32 teeth, and photos taken at the excavation site show the iron pin in the place where the missing tooth would have been.