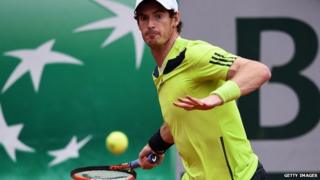 Andy Murray has made it through to the second round of the French Open after a nervy display in his opening match.

The Scot started strongly, taking the first two sets with ease; but Golubev fought back to win the third, picking up the support of the crowd too.

In the next round he'll face either Australia's Marinko Matosevic or Dustin Brown of Germany.

After the match Andy was quick to point out some difficult weather conditions: "It was windy, especially at the beginning.

"I didn't go for my shots too much, I just tried to be patient," he said.

Andy has never won the French Open - the furthest he has reached in the tournament is the semi-finals in 2011.

The French Open is one of the famous Grand Slam tournaments: the four biggest tennis competitions in the world. The other three are Wimbledon, the US Open and the Australian Open.