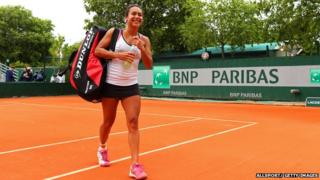 Heather Watson is through to the second round of the French Open.

It's the ninth win in a row for Watson, who won the ITF Prague Open earlier this month and came through three rounds of qualifying to make the main draw in Paris.

It's the third time Heather has made it to the second round and will face the 4th seed, Romania's Simona Halep next.

It's been a tricky year for Watson. She was diagnosed with glandular fever in April 2013 and was forced to take some time off.

Then in March this year, she had to have another two months out with a shoulder injury, before returning to the court this month.

Speaking to the BBC after her win today, Heather said: "I changed this year, I'm a different person.

"I've been through a different experience, it's made me grateful, I see things more clearly and feel I'm not taking anything for granted," she went on.

"I want to take as much advantage of that as I possibly can and just be professional."