Gareth Bale said winning the Champions League 'will live with me forever' after his goal helped Real Madrid beat Atletico Madrid 4-1 in the final.

The former Tottenham forward scored the most important goal of his career and gave Real the lead in extra time.

Bale became the world's most expensive player when he joined the Spanish side last year from Tottenham for a massive £85.3m. 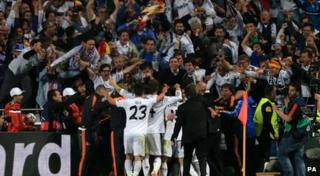 PA
Celebrations erupted amongst the fans.

"It is what every footballer dreams of and it doesn't come bigger in club football," said Bale.

He added: "The celebration of the crowd meant everything to me, but the most important thing is we worked hard as a team and won the trophy and the 10th title for the club."