Fire crews save the Glasgow School of Art

Firefighters say they've managed to save the Glasgow School of Art and most of what's inside after a massive blaze.

Scottish Fire and Rescue Service crews stopped the destruction of both the structure and most artworks inside.

Fire broke out at the building in Glasgow city centre at around 12:30 on Friday.

Eyewitnesses said the fire appeared to have started when a projector exploded in the basement of the school. 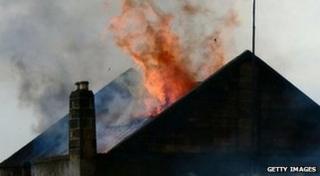 Getty Images
The flames engulfed the roof of the building

Everyone who had been in the building was said to have got away safely.

The main blaze was put out by about 17:00 on Friday but there were still pockets of fire within the building.

Fire crews arrived on the scene within four minutes of the alarm being raised.

Assistant Chief Officer Dave Boyle said crews had been working "absolutely flat out" in an effort to save "this treasured building and many of the items it housed".