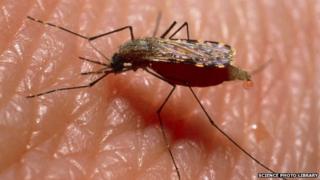 A group of African children whose bodies are naturally immune to malaria, is helping scientists search for a vaccine against the disease.

American researchers found that the kids, from Tanzania, produce in their body a special disease-fighting substance - an antibody - that fights the malaria parasite.

To see if it worked on others, scientists injected a form of the antibody into some mice. They found the mice became much better protected from the disease than other mice.

The antibody attacks the malaria parasite at an important stage in its growth, trapping it and stopping it spreading through the body.

Scientists now want to carry out these tests in other animals and humans to see whether the discovery could lead to a vaccine for malaria being made.

Malaria is one of the most deadly diseases on Earth.

It's a parasite spread by a particular kind of mosquito - the Anopheles. It's particularly harmful to kids, and is a huge problem in countries across Asia, Africa and South America.

It's estimated that more than 600,000 people in the world die of malaria every year.

Special nets to cover beds, insect repellents and destroying mosquito breeding grounds all help to stop people getting the disease - but a vaccine would be a more effective weapon against malaria.