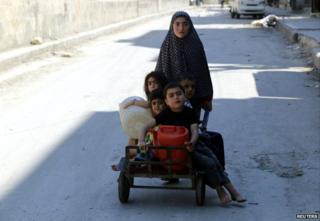 Rations are being delivered to 60,000 people in the Syrian province of Aleppo.

Peter Maurer from the International Committee of the Red Cross said: "We have a major food distribution ongoing in Aleppo. It is the first time in months on that scale."

Earlier this month his organisation said the situation in Syria was "catastrophic" after three years of war.

Mr Maurer said he had first presented the Aleppo plan to the Syrian government in January.

"It is four months overdue," he said.

The aid delivery has been organised by the International Committee of the Red Cross and the Syrian Arab Red Crescent.