No selfies allowed by voters in polling booths 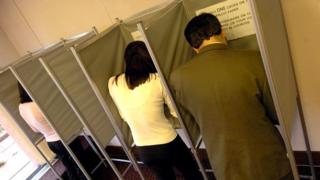 Staff at polling stations across the country have been told to stop people taking selfies as they vote.

Even though it's not illegal to take a pic of yourself when voting, authorities are worried selfies could give away how other people have voted.

Anyone who gives away how someone else votes, even accidentally, could get a £5,000 fine or even go to prison.

It's really important in an election that people keep their votes secret until the official counts are announced.

Anyone who gives away how someone's voted, or is about to vote, could be breaking the law.

In polling stations, voters are given a special piece of paper called a ballot paper, with their own unique number on it, and the names of the parties and candidates up for election.

To vote, you put a cross next to who you want to vote for, and then slip the ballot paper inside a locked box.

Today's big vote is for the European Parliament as well as local councils in England and Northern Ireland.

Guide: Why are the European elections important?

Staff have been told to put up "no photography" signs in polling stations.

Some have been told how to tell what a selfie is - and what to do when they spot someone about to take one in or around a polling booth.

Now some officials are saying that the law needs to be updated, to make it clearer: they say it was written over a century ago, when camera phones didn't exist.

Why are the European elections important to the UK?