Why are the European elections important to the UK?

Elections for the European Parliament take place on 22 May 2014. This guide explains what people will be voting for and why it matters.

What is the European Parliament?

The European Parliament represents people who live in European Union (EU) countries. The EU is like a club of countries that agree to work together.

People in each country vote to elect Members of the European Parliament (MEPs) every five years.

Once elected, MEPs meet regularly in France and Belgium to vote on big issues that may affect their countries. 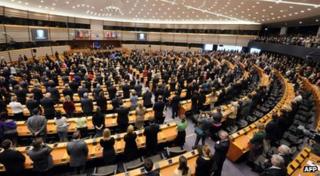 AFP
These MEPs are meeting in Brussels

What does the European Parliament do?

One of the main jobs of the European Parliament is to change, approve or reject laws that apply to all EU countries.

To change laws, Parliament has to agree with another body called the European Council.

The European Parliament also decides how the EU's money should be spent, and checks that other parts of the EU are working fairly.

How do European laws affect us?

When countries join the EU they agree to stick to a set of laws. 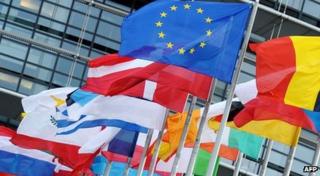 The European Parliament votes on laws about issues like workers' rights, immigration, the environment and animal welfare.

The UK has agreed to stick to these laws.

How will this year's election affect the UK?

Some people think the United Kingdom should leave the European Union.

The big question is whether a political party that wants the UK to leave the EU straight away will do well in the election.

How well the main parties do in these EU elections could influence how confident the parties and their leaders are ahead of 2015's general election.

Which UK parties are up for election?

There are four main parties up for election: they are the Conservatives, Labour, Liberal Democrats and UKIP. The party with the most votes is seen as the winner.

Plus in Scotland, there's the Scottish National Party - and in Wales Plaid Cymru.

Smaller parties put up candidates too and some people stand independently.

Who gets to vote?

Anybody who lives in an EU country that is over 18 years old can vote in the European election.

In Britain it's the only time other than a general election that all 46 million eligible voters can have their say.