Yaya Toure not happy with birthday 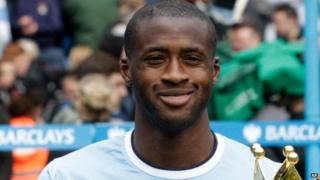 It's not been a happy birthday for Manchester City footballer Yaya Toure.

The club gave him a cake last week as the team were on a flight to Abu Dhabi in the Middle East.

But the midfield star claims City's owners showed him a lack of respect and ignored him on his birthday.

Toure initially played down the row and wrote online: "Don't take words that do not come from my mouth seriously."

But he later posted a message that said: "Everything Dimitri said is true. He speaks for me. I will explain after the World Cup."

Now Toure has sparked rumours he could leave City after saying he doesn't know who he'll be playing for next season.