The British Museum has carried out scans on eight Egyptian mummies, revealing amazing details about the people inside the caskets.

Never before has anyone seen mummy hair, muscles and bone in such detail.

Each mummy was put into a special CT scanner (an X-ray machine) to investigate the mummies layer by layer, building up a 3D picture of each one.

The study's revealed many details about who these people were, how they lived and how they died. 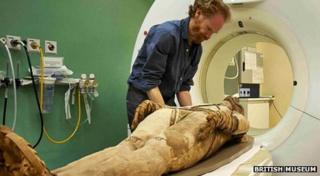 By peeling away each layer museum staff could see the face of the person underneath the bandages and for the first time to tell the age of the mummies, what they ate, and the kinds of diseases they suffered from. 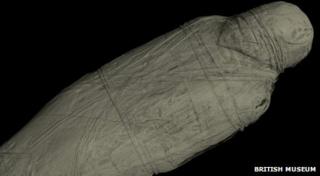 John Taylor, from the British Museum said he was "stunned" when he saw the images.

"It's as if you switched a light on in a dark room and things jump out with a clarity where you are able to find out what the life experiences of these people really were," he said. 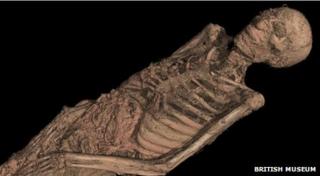 British Museum
The bodies could be seen in amazing details

The researchers were able to see muscles and even arteries in the ancient bodies.

They even saw that some arteries seemed clogged with fatty deposits, which could mean that these particular people ate rich fatty foods and maybe died of heart disease. 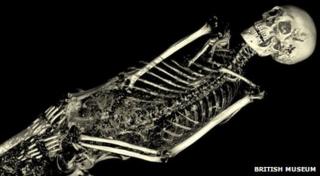 After peeling away the muscle, researchers were able to see the skeletons in amazing detail.

They were able to guess the age of the individual mummies from their pelvis and their teeth.

Many of them had bad teeth with signs of abscesses (infections), which would have been very painful to live with. 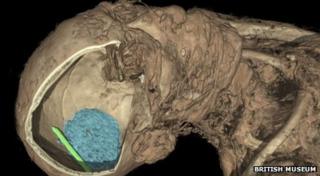 One scan shows a spatula (shown in green) left inside the mummy's skull.

The tool would have been used to pull the brain out through the nostrils during the embalming process.

But in this case a large chunk of brain (shown in blue) was left inside, along with the tool, possibly because the person carrying out the embalming did a bad job.

Researchers also discovered that the mummies lived between 3,500BC and 700AD.

All of them lived in the Nile Valley in Egypt.