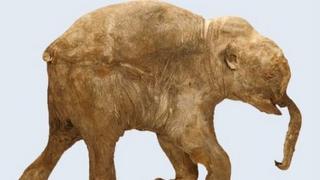 A perfectly preserved baby mammoth which died 42,000 years ago has been unveiled at the Natural History Museum in London.

The frozen baby called Lyuba was discovered in 2007 by a Siberian deer herder in the permafrost of north-west Siberia.

Palaeontologist Prof Adrian Lister, described seeing her for the first time as an "incredible experience". 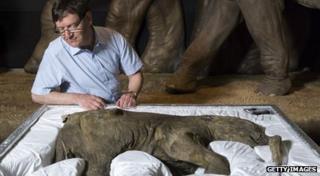 The mammoth looks like her distant elephant family relatives with wrinkled leathery skin, as most of her woolly covering has been lost over the years.

Scientists say Lyuba is the most fully preserved mammoth ever found.

'A creature from the Ice Age'

Mammoths first appeared around 4.8 million years ago. It's thought that climate change and hunting by humans are among the explanations for their disappearance about 5,000 years ago.

"To be eyeball to eyeball with a creature from the Ice Age which is so perfectly preserved and lifelike, looking like she is lying down and might walk away at any minute, is really moving. I have to pinch myself to think she died 42,000 years ago," said Prof Lister.

Lyuba will be on show at the Natural History Museum from Friday 23 May until 7 September.