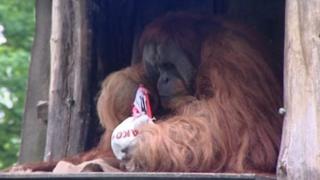 The great ape convinced his keepers he had foreseen the future by picking Dortmund's shirt out of two footballs and putting it on his head.

But although orangutans are among the most intelligent primates, it turns out they can't see into the future as Bayern Munich thrashed Dortmund 2-0.

It completed a terrific season for Bayern, who are also the German league champions.