Great Britain's women gymnasts have had a fantastic week at the European Women's Artistic Gymnastics Championships in Bulgaria.

For the senior team, Rebecca Downie stole the show by winning gold in the women's uneven bars on Sunday.

The British juniors had their best-ever European Championships, winning six medals in total.

Amy Tinkler, 14, was just behind Catherine in silver position, adding to a bronze she won earlier on the vault.

These medals came on top of the silver they won in the team event, and the bronze in the all-around floor event, earlier in the week.

It was the juniors' best-ever performance in a European Artistic Championships.

Ellie said: "I just can't believe it; the whole week has been incredible."

Rebecca Downie, from Nottingham, is the first British women's European champion since Beth Tweddle in 2011. 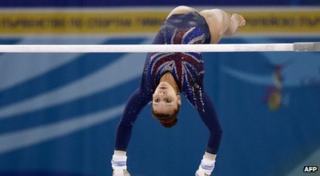 AFP
Rebecca Downie: "It's such an amazing feeling, I'm so happy."

Rebecca said: "It's such an amazing feeling, I'm so happy." She added: "I think you could see the emotion when I landed and it was just a massive relief.

Her last medal was at the Commonwealth Games back in 2006 so she's had a long wait for this success. 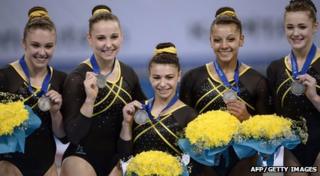 On Wednesday it's the turn of the men and the boys as the men's European Gymnastics Championships get under way.