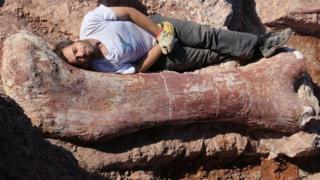 Dinosaur experts in Argentina believe they have found bones belonging to the biggest and heaviest dinosaur to have ever walked the Earth.

The beast would have weighed as much as 14 elephants and been as tall as a seven storey building.

Based on its huge thigh bones - which are the length of a fully grown man - it was 40m long and 20m tall.

It's thought to be a new species of titanosaur - an enormous plant eater that lived around 95 million years ago. 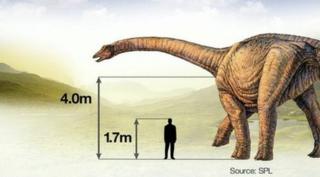 The dinosaur towers over people!

A local farm worker first stumbled on the dino remains in the desert near La Flecha, on the west coast of Argentina.

The fossils were then dug up by a team of palaeontologists - dinosaur experts - from the Museum of Palaeontology Egidio Feruglio. 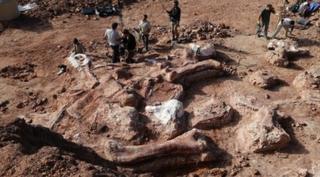 The team worked carefully to get the bones out

They unearthed the partial skeletons of seven beasts - about 150 bones in total - all in "remarkable condition."

"Given the size of these bones, which surpass any of the previously known giant animals, the new dinosaur is the largest animal known that walked on Earth," the researchers told BBC News.