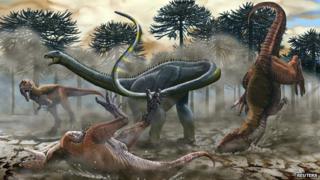 Scientists in Argentina have found evidence of a nine-metre dinosaur, related to Diplodocus.

Though this sounds big, it's actually small compared to other dinosaurs of the same kind - sauropods.

Called Leinkupal laticauda, it's the first dinosaur of its kind - known as a diplodocid - found in South America.

It lived around 140 million years ago, millions of years after scientists had previously thought diplodocids had gone extinct.

Until now, scientists thought all diplodocids - which had extra-long necks and whip-like tails to fend off predators - died out at the end of the Jurassic period, about 145 million years ago.

This new discovery suggests that this smaller relative carried on living much later than that.