The curse continues for Benfica FC 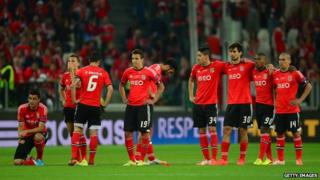 It means their 52 year wait for a continental trophy goes on.

The Portuguese side lost to Sevilla 4-2 on penalties - their eighth straight defeat in a European final.

It could be down to the supposed hundred-year curse we told you about yesterday, which was put on Benfica by their former manager Bela Guttman.

The Hungarian said they wouldn't win another European cup for one hundred years.