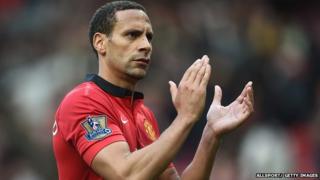 Rio Ferdinand will leave Manchester United in the summer after being told he wouldn't be offered a new contract.

The 35-year-old defender has been at the club for 12 years winning six league titles, two League Cups, one Champions League and a Club World Cup.

Manchester United are thought to have offered him an ambassador role as a 'Club Legend' in recognition of his achievements at the club.

It's thought Rio wants to carry on playing but his next club is unknown.