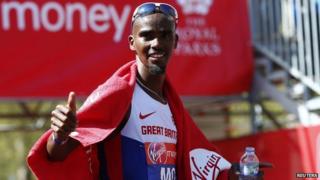 Mo Farah has confirmed that he will compete for England at this year's Commonwealth Games in Glasgow.

The double Olympic gold medallist tweeted the news, saying: "Hi guys! I will be running in the Commonwealth Games this year. See you in Glasgow,"

Up to now, Farah had been undecided about whether to compete in the games.

He finished in 8th place in the London Marathon last month.