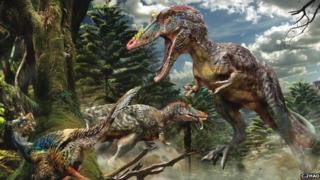 Scientists have found the remains of a new type of tyrannosaur dinosaur on a Chinese construction site.

The dinosaur nicknamed Pinocchio rex, had a very long face, a row of horns on the top of its head and a lighter more agile body.

The remains were dug up by scientists from Edinburgh University, UK.

The snout of the Pinocchio was 35% longer than any other animal of its size.

It was much smaller and lighter than the T rex at about 9 ft tall.

Scientists believe that they would have had different hunting techniques and wouldn't have been in direct competition with the T rex.

Here's Dr Steve Brusatte from the University of Edinburgh, UK. He was one of the experts who identified the dinosaur. Hear him answering questions about this 'one in a million' find.

The findings of the new dinosaur, settles the argument relating to two fossils dug up in Mongolia in 2009. The bones found in Mongolia were very similar to Pinocchio rex but were not fully grown in size, researchers thought it was the skeleton of a young T. rex not a new type of dinosaur.

Scientists say the discovery of this new skeleton shows the Mongolian fossil was a young Pinocchio rex.

"The new specimen is twice the size of the youngsters, and it still has the same features - including the distinctive horns."

"It's the slam dunk we needed, that the long-snouted tyrannosaurs were real."