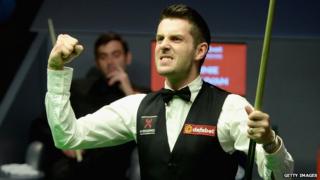 Mark was the runner-up in 2007 and it looked like he might miss out again when he was 10-5 behind.

But then things turned around for him and he managed to beat five-time champ Ronnie O'Sullivan 18-14.

It was an impressive win as Ronnie had never been beaten in a world final before.

Mark's victory means he returns to the top of the world rankings.

He dedicated his win to his late father, who died when he was 16.