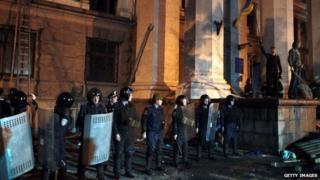 The government in Ukraine says its army will carry on battles with groups who want the country to have closer ties with Russia.

One of Ukraine's leading politicians says the operation will continue despite fierce violence on Friday.

Ukrainian forces are trying to re-take control of several towns and cities in the east of the country that have been taken over by armed anti-government groups, who want more Russian influence in Ukraine.

There have been months of clashes between people who want the country to have closer ties with its neighbour Russia, and others who want Ukraine to have more to do with the rest of Europe instead.

To find out more have a read of Newsround's guide to what's happening in Ukraine.