Washed up whale to be collected for scientific study 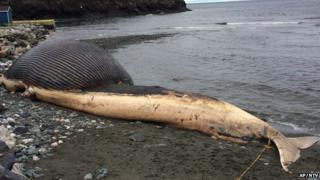 The body of a blue whale which washed up in Newfoundland, Canada, will be recovered by the Royal Ontario Museum.

The whale was one of at least nine which died after being trapped in ice in the north Atlantic Ocean.

Its body washed ashore and remained there, swelling with gas and making an unpleasant smell. Local people were worried it might explode!

Now the Toronto museum says it will collect the 25m whale so its skeleton can be used for science.

Blue whales are the one of largest animals ever to live on Earth.

There are fewer than 250 mature adult blue whales in the Northwest Atlantic population.

Samples from the whales will be taken and its skeleton will be studied by scientists.

Dr Mark D Engstrom from the museum said: "This loss, representing up to 5% of this endangered species is extremely unfortunate.

"This is an important opportunity to further our understanding of these magnificent animals and provide an invaluable resource for Canadian science and education now and in the future."