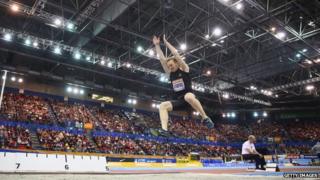 Greg jumped 8.51 metres at an event in San Diego, USA, but Chris said the jump was "not legitimate".

A jump is judged to be illegal if an athlete "touches the ground beyond the take-off line" when taking off.

But officials from USA Track and Field have now said "all marks are verified and legal".

A strip of soft clay at the edge of the long jump helps judges check a jump is legal. 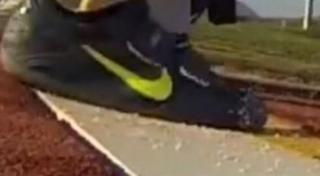 If the clay is marked, the jump is a foul.

People sent pictures of Greg's jump to Chris. They appear to show his foot over the white line.

Jumpers have overstepped the line before, but as long as the clay isn't marked the jump is still legal.

Chris Tomlinson has asked UK Athletics to inspect Greg's jump, but made clear he had the "utmost respect" for his fellow jumper and regarded him "as a friend".

Chris and Greg both held the previous British long jump record of 8.35 metres.