Some of the world's largest and busiest coastal cities are sinking, according to scientists.

Gilles Erkens from the Deltares Research Institute said New Orleans, Bangkok and Jakarta could eventually sink below sea level unless action is taken.

It's well known that sea levels is rising, but in some cities the ground is sinking too. 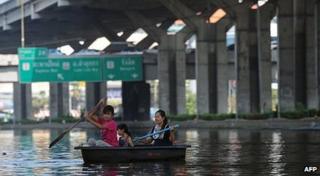 In some areas land is sinking ten times faster than the sea level is rising.

North Jakarta in Indonesia has sunk four metres in the last 35 years.

Scientists use satellites to measure whether the ground is sinking. They can see changes as small as 1mm.

In some areas the ground sinks naturally but in this case one of the main reasons is manmade. 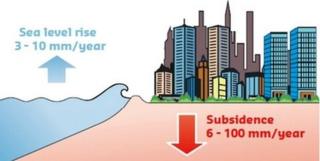 Some cities pump water from under the ground to use for drinking water. This can cause the land above it to sink.

How do you stop a city sinking?

Dr Gilles Erkens who worked on the study said: "The most rigorous solution and the best one is to stop pumping groundwater for drinking water."

The city of Tokyo sank two metres before water pumping there was stopped.

Countries who want to follow Tokyo's example would need to find a new way of sourcing drinking water. That's not always easy to do.