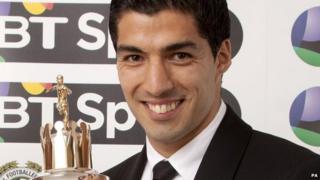 Liverpool striker Luis Suarez has been named Player of the Year by the Professional Footballers' Association.

The 27-year-old player from Uruguay was handed the prize at a ceremony in London on Sunday.

Suarez said: "The Premier League is full of really great players and so it is a great honour when these players recognise your work on the pitch."

The prize is given out every year to a player who is judged to the best player.

As well as honouring a top player every year, the PFA also reveal a dream team of the year's best players.

Premier League Team of the Year 2014

Chelsea's Eden Hazard was voted Young Player of the Year.