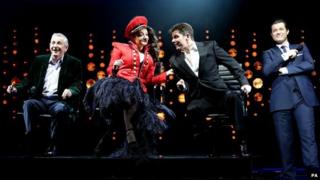 A West End musical based on the ITV series, The X Factor, is to close after just two months of performances.

The show called I Can't Sing! makes fun of the TV talent show and its creator Simon Cowell.

I Can't Sing! was partly written by comedian Harry Hill and opened to positive reviews at the London Palladium in March.

The announcement follows the closures of some big West End shows due to falling audience numbers.

Rebecca Quigley, boss of Stage Entertainment UK, said the show had been well received "but it seems that isn't always enough".