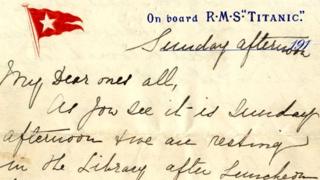 The last letter to be written on the Titanic ship has been sold for £119,000 at auction.

It was written by survivors Esther Hart and her seven-year-old daughter Eva, eight hours before the ship hit an iceberg.

It is said to be the only known example written on the Titanic.

The letter only survived because it was in the pocket of her husband's coat which he gave her to keep warm.

It was meant for her mother in Chadwell Heath, east London.

The Titanic sank on the night of Sunday 14 April 1912, on the fifth day of its first voyage from Southampton to New York.

The letter was sold at an auction in Wiltshire on Saturday.

The winning bid was but fees and other charges brought the total to £119,000, which the auctioneers said was a new world record for a Titanic letter.