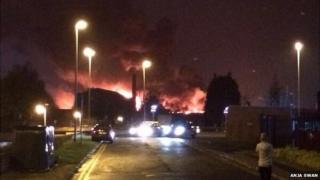 Anja Swan
The fire started just before 2am on Monday morning.

A huge fire on an industrial estate in Leeds, which started just before 2am on Monday morning, has been brought under control.

Up to 80 fire-fighters tackled the blaze and nearby roads were closed.

People in the city centre were told to keep their windows and doors closed because of potential chemicals that were kept on the site.

Nobody was hurt in the fire and crews are expected to stay at the scene throughuot the day.