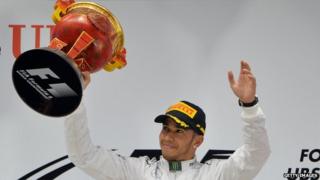 Britain's Lewis Hamilton has won his third race in a row at the Chinese Grand Prix.

He led from start to finish in a dominant display at the Shanghai track.

It's the twenty-fifth win of Hamilton's career and puts him second in the driver's standings after 4 races.