Gerrard and Suarez on player of the year shortlist 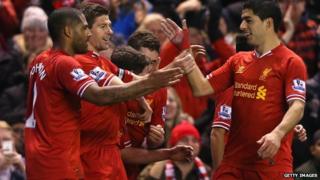 The Professional Football Association has announced the shortlist for its player of the year award.

Along with these three are Chelsea's Eden Hazard, Manchester City's Yaya Toure and Southampton's Adam Lallana.

The winners will be announced at a ceremony in London on Sunday 27 April.