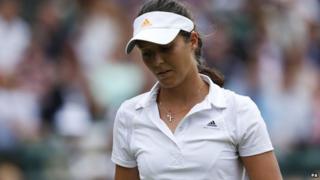 The British women's number one and world number 64 has only completed one match this year - a first-round defeat at the Australian Open.

In 2013, she reached the last 16 at Wimbledon but since August problems with both of her wrists have meant Laura had to pull out of a number of tennis competitions.

She says her surgeon is very confident that she will be back in action soon "pain-free before you even have time to miss me".