'Most Earth-like planet yet' discovered

The most Earth-like planet yet has been discovered, say scientists.

The planet is thought to be a little bigger than Earth and most importantly has the potential to hold liquid water - an essential ingredient for life.

It was spotted by the Kepler telescope and therefore has been given the catchy name of Kepler 186f.

The Kepler telescope has found nearly 1,000 new worlds since its launch in 2009 and in February alone it was announced that it had spotted 715 new planets. 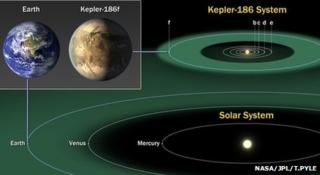 NASA/JPL/T.Pyle
Kepler 186f orbits a star that is smaller and cooler than our Sun.

Kepler 186f is about 500 light years away from the Earth. One light year is a distance of about six trillion miles, so the new planet isn't close by!

Check out more of our space stories