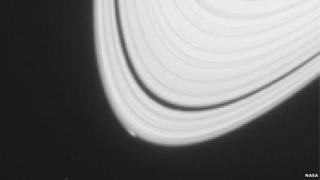 Scientists believe they have discovered what could be the birth of a new moon in the rings of Saturn.

The picture above, which shows a tiny bump on the outer ring, was captured by a spacecraft and led scientists to believe it is some sort of object.

They've named the object Peggy and estimate it may be about a kilometre wide and made of ice.

If Peggy is confirmed, the object will become the 63rd moon in Saturn's orbit.

What next for Peggy?

Saturn is the second biggest planet in our solar system. It has more than 60 moons and is made up of different gases.

Its many moons vary in size, with some orbiting within its rings and others outside of the planet.

Scientists say if Peggy continues to orbit inside the rings, it could collide with smaller lumps of ice and disintegrate.

But if Peggy escapes beyond the rings, it will run the risk of drifting into the path of much larger moons.

They say if Peggy does travel beyond the rings, it will be impossible for them to track it because it is so small.

To find out more about the solar system, check out our guide.