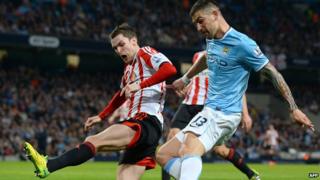 Manchester City's hopes of winning the Premier League took a serious blow, after drawing 2-2 with Sunderland on Wednesday.

The draw with bottom club Sunderland, leaves them six points behind leaders Liverpool.

City's hopes of repeating their 2012 Premier League success now rest on both Liverpool and Chelsea losing their matches.

Everton, who were also in action on Wednesday, lost 3-2 to Crystal Palace, meaning they fall behind Arsenal in the race for fourth place.