Rhea on the loose in Hertfordshire 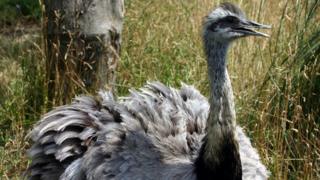 People in Hertfordshire are on the look-out for a rhea - a big ostrich-like bird - which has escaped from its home.

The bird was kept as a pet in Brent Pelham, in the north of the county, but escaped in the middle of March.

Since then two sightings have been reported to the police, the most recent of which was on 13 April.

Rheas are flightless ground birds that come from South America. Their wings are large - 250 cm - and are spread while running, to act like sails.

The RSPCA says: "Rheas are large birds and have the potential to be dangerous as they are strong, fast and have sharp claws.

Our advice to the general public is keep well away and call us or the police if they see the bird."

Rheas are similar to ostriches but instead don't have fine plumes, are brown in colour and have three-toed feet - unlike an ostrich's which has two.