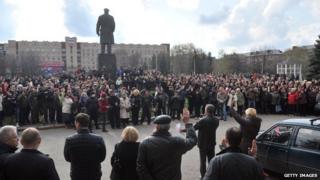 Pro-Russian groups have taken over more government buildings, despite a warning of military action from Ukraine.

Protests by people who want Ukraine to stay as one have also taken place.

A crisis meeting between Ukraine, Russia and the West is due to take place on Thursday.