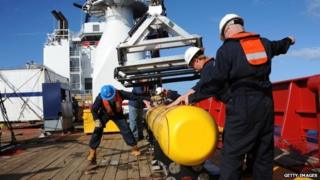 Teams searching for the missing Malaysia Airlines plane are to send out a robotic submarine into the sea for the first time.

Search chief Angus Houston said the Bluefin-21 drone would be sent down as soon as possible to search the sea floor.

Teams have been using a towed pinger locator to listen for signals from the plane's "black box" flight recorders.

What is a black box?

But no new signals have been heard since 8 April, and it's thought the flight recorders' batteries may have run out.

Flight MH370 went missing on 8 March. It was flying from Kuala Lumpur to Beijing when it lost contact with air traffic controllers over the South China Sea.

Malaysian officials believe, based on satellite data, that it ended its flight in the southern Indian Ocean, thousands of kilometres off course.

An international search has focused on waters west of the Australian city of Perth, with teams racing against time to detect signals before the flight recorder batteries - which last about one month - run out. 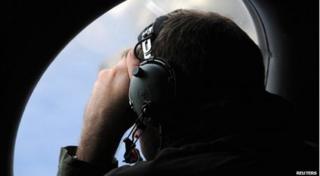 Air Chief Marshall Houston from the search effort, said that given no signals had been detected in six days, it was time to go underwater.

How will the Bluefin-21 work?

The Bluefin-21 - an almost 5m-long underwater vehicle that can create a sonar map of the sea floor - will search the area where there were four signals heard last week.

Officials believe those signals - picked up by the pinger locator on an Australian vessel - are consistent with flight recorders.

Each Bluefin-21 mission will last 24 hours, with 16 hours spent on the ocean floor, four hours' diving and resurfacing time, and four hours to download data.

Officials have no idea yet why the plane moved so far from its flight path. Investigators are looking at lots of different options.

But recovering the flight recorders is seen as very important to understanding what happened to the plane.

If anything in the news upsets you, read our guide to find out what to do.