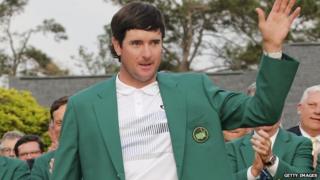 Bubba Watson clinched his second Green Jacket in three years by holding off Jordan Spieth and Jonas Blixt to win the 78th Masters.

The American left-hander shot a final-round 69 to win by three after overhauling a two-shot deficit on his co-overnight leader Spieth at Augusta.

The 2014 Masters in numbers

Hardest hole: The par-four 11th took an average of 4.5 strokes to complete. Only 10 of the 874 birdies this week were snatched from the hole named White Dogwood

Easiest hole: The four par fives were the easiest hole statistically all week, none more so than 13. Named Azalea for its decorative shrubbery, players felt right at home, averaging 4.7 strokes

Spieth was bidding to beat Tiger Woods as the youngest ever winner and duelled with Watson for much of the day, but the Texan's chances were sunk in the water of Amen Corner and he carded 72 to end five under.

Sweden's Blixt edged alongside Spieth with a 71, with Spain's Miguel Angel Jimenez fourth on four under after a 71.

Americans Rickie Fowler (73) and Matt Kuchar (74) finished two under, with England's Lee Westwood (73) one under in seventh place, his 17th top-10 finish in majors.

Watson became the 17th player to win two Masters titles, eight of whom have gone on to win three or more Green Jackets.

Watson dropped a shot at the 10th after hitting a poor chip across the green, but the tournament dramatically lurched his way when Spieth's tee shot to the short 12th rolled down the bank into Rae's Creek, the graveyard of so many Masters contenders.

Watson edged into a three-shot lead with a birdie on the par-five 13th and parred his way home for victory.