Farah chose to sit among the second pack of elite runners, but soon found himself 38 seconds behind the lead group, headed by Kipsang, at the halfway mark.

That gap increased to 49 seconds after 15 miles and then over a minute by the time they reached 19 miles.

The Briton, who won 5,000m and 10,000 gold at the 2012 Olympics and last year's world championships, also made errors at two drinks stations when he tried to pick fluids.

"I will be back," said Farah. "I'm not going to finish it like this. I gave it my all but I'm disappointed I didn't go out there and give what the crowd deserve.

"It was pretty tough. I'm disappointed but you try things and sometimes it doesn't work - you have to give it a go. You learn - life goes on." 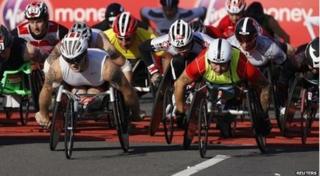 Weir was a second behind Hug with South African Ernst van Dyk in third.

McFadden is back wheelchair racing after winning a silver medal at the Sochi Winter Paralympics.

She finished a minute and a half clear of Switzerland's Manuela Schar and Japan's Wakako Tsuchida with Britain's Shelly Woods sixth (1:54.52).