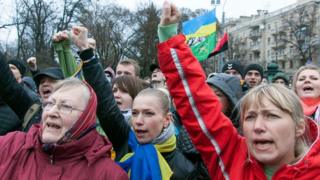 One of Ukraine's Ministers has said Ukrainian security forces have started an operation to remove pro-Russian militants who took control of government and police buildings in the eastern part of the country.

Earlier Russia warned that any use of force in eastern Ukraine could ruin crisis talks due later this week.

Last week we told you Pro-Russian protestors had taken over government building's in three big cities in the East of Ukraine.

The country has been in crisis over recent months, with tensions mounting between people who want Ukraine to stay an independent country, and those who think it should become part of Russia.