Man United knocked out of Champions League by Bayern 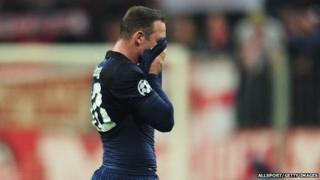 Manchester United have been knocked out of the Champions League after a 3-1 defeat to Bayern Munich.

United went into Wednesday's quarter final second leg with a 1-1 draw from the first leg.

A goal from Patrice Evra gave United the lead. But United's hopes were dashed two minutes later when Bayern equalised thanks to Mario Mandzukic.

Thomas Muller went on to put Bayern ahead, before Arjen Robben wrapped up the 4-2 aggregate win.

United are already out of the Premier League title race, as well as the FA Cup and League Cup.

So the Champions League had been manager David Moyes' final chance to turn around a poor season.