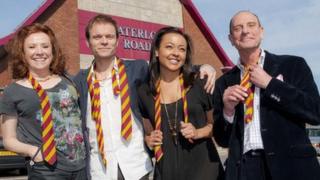 Some sad news for Waterloo Road fans - the hit BBC show is to end in 2015.

It has been running since 2006 and will complete its 10th series next year.

Waterloo Road is set in a tough school, and follows its teachers, parents and pupils. It focused on some difficult and challenging subjects over the last 8 years and the viewing figures were often in the millions.

BBC bosses said they were "incredibly proud" of the show, but that it had "reached the end of its lifecycle".

Charlotte Moore, BBC One controller and Ben Stephenson, controller of BBC Drama said: "We are incredibly proud of Waterloo Road, and would like to thank Shed Productions and all the cast and teams involved across the ten series,"

"On BBC One it's important to make room for new drama and we are committed to commissioning new drama series for 8pm. There are some really exciting ideas currently in development but nothing to confirm yet."