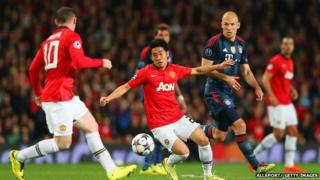 Manchester United managed to hold Bayern Munich to a 1-1 draw in the Champions League on Tuesday night.

Nemanja Vidic put David Moyes' side into the lead before Bastian Schweinsteiger got Bayern a precious away goal.

But he was later sent off and will miss the second leg in Germany next week.

United boss David Moyes says he's still confident his side can pull off an upset when the teams meet again.